At a time when governments are stepping up measures to combat climate changes, water management is positioning itself as a global issue. Oceans pollution, eutrophication of water courses, contamination by heavy metals and industrial effluents, the increasing spread of deserts and restricted access to drinking water are all challenges that must be met by implementing drastic action plans.

70 % of the Earth is covered by water. However, only 2.8% of all water on the planet is fresh. Much of this fresh water is concentrated at the poles, in the form of ice. As a result, only about 0.25% of fresh water is directly available to the world’s population.
According to UNICEF, the World Health Organization (WHO), UNESCO and FAO,
– 2.2 billion people do not have access to safely managed drinking water services
– 4.2 billion people lack safely managed sanitation services
– 297,000 children under the age of five die every year from diarrheal diseases due to poor water quality.
– Water scarcity affects four out of ten people
– 80% of wastewater returns to the ecosystem without being treated or reused.
– The agricultural sector is the largest consumer of freshwater, responsible for almost 70% of global water withdrawals.
The need for water will continue to grow, according to UN population statistics, which indicate that the world population is expected to increase to 8.5 billion in 2030 and reach 9.7 billion in 2050.
According to UN Secretary-General António Guterres, by 2050 at least one in four people will live in a country affected by freshwater scarcity: “Without effective management of our water resources, we risk intensifying conflicts between communities and sectors and even increase tensions between nations.

Today, much of the disagreement between states over water concerns the use of transboundary resources. According to UN estimates, some 300 transboundary rivers could become an issue in the next few years and generate conflictual situations. 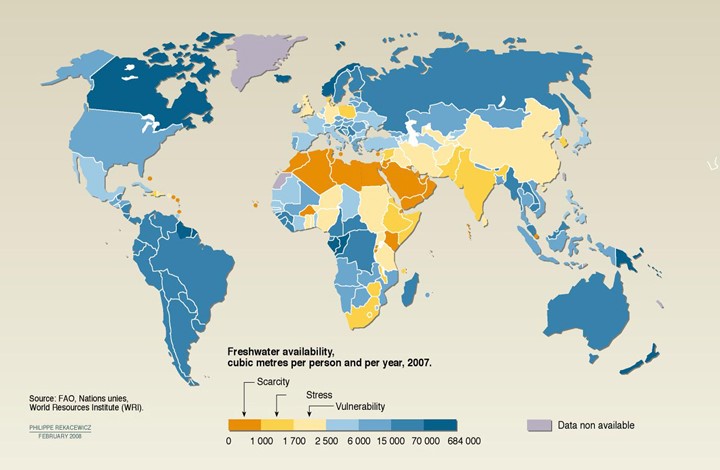 The increase in needs will lead to an increase in the price of water. The scarcity of drinking water resources and the increase in its price might constitute a brake on the economic development of certain disadvantaged countries.
In order to minimize these problems, various solutions can be envisaged, such as more rational management of water resources, the use of more efficient irrigation techniques, the development of less polluting and more water-efficient industrial processes, and the optimization of wastewater treatment technologies.

Solugen offers a solution for the treatment of heavily contaminated water in the industrial and agricultural fields. In the pig sector, its technology enables the recovery of 84% of drinking water from the volume of treated manure. The clean water from the slurry can be reused for watering animals, washing pigsties, etc. In the industrial field, Solugen’s solution, if the contaminants allow for treatment, offers the possibility of recovering up to 97% clean water.