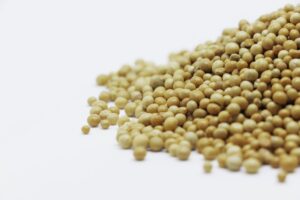 According to some researchers, by 2030 the planet would produce some 5 billion tons of excrement each year, most of which would be attributable to farm animals. Among these farm animals is the pig. In January 2020, there were approximately 677.6 million pigs in the world. The geographical distribution of farms is uneven, with significant concentrations in certain territories and even in specific regions (e.g. Catalonia, Brittany, or the Chaudière-Appalaches region, which concentrates 49% of Quebec’s pork production). These areas where pig farms are concentrated therefore produce large quantities of manure, a natural fertilizer that contains, in addition to trace elements and other nutrients, macronutrients (nitrogen, phosphorus, potassium) essential for crop production. The management of these effluents is often complex; there is little land available in the surrounding area for manure application, and therefore the operating costs are increasing because the manure has to be transported further and further away.

The main geographical poles of hog production are :

Phosphorus, yes, but not too much…

When used in excess, phosphorus generates environmental problems. In some cases, the ecological consequences can be significant. High levels of nutrients such as phosphorus and nitrates in manure and slurry can lead to pollution of water tables and waterways.

An overdose of mineral fertilizers, as well as massive applications of livestock manure providing amounts of phosphorus far in excess of crop needs, see this element accumulate in soils that generally have the capacity to easily retain excess phosphorus.  These soils, depending on weather conditions and the intensive farming practices that lead to their compaction, can erode, and thus phosphorus-rich particles will be disseminated in the surrounding area, and partly end up in waterways. The same applies to the leaching of arable land. Leaching is the transport of elements by rainwater towards the water table. Leaching carries clay and silt particles from the soil, or ions from the upper layers of the soil to the deeper layers. This can have an impact on the quality of groundwater and watercourses.

Since the early 1980s, Quebec has been investing heavily in the prevention of phosphorus pollution of rivers and lakes. Phosphorus is responsible for the eutrophication of lakes, and the management of its input into water bodies remains a major issue for all human activities.

The management of agricultural effluents (slurry, manure) is regulated according to an agro-environmental fertilization plan (PAEF) defined by an agronomist. Thus, any farm fertilizing according to an AEFP and receiving animal dejecta or farm compost from one or more other farms must determine its capacity to receive phosphorus according to the fertilization standard in force. Similarly, any operation that is fertilizing under an FEAP and cannot use all of its manure or farm compost to meet the nitrogen and phosphorus amounts set out in the fertilization standard in effect must determine the surplus phosphorus that it will have to dispose of in another way.

Paradoxically, animal excrements from livestock farming include large quantities of phosphorus and simultaneously the natural sources of mineral phosphorus from mining are diminishing. We are talking about a resource that is limited in time and non-renewable. According to several studies, such as that of Dana Cordell of the University of Linköping in Sweden, the world’s phosphate reserves will be exhausted within 50 to 100 years. The United States Geological Survey and the International Fertilizer Industry Association predict that phosphate reserves will be exhausted within 100 to 125 years. It is estimated that phosphorus production will enter a deficiency period from the 2040s to the 1950s. In other words, its demand will be higher than its availability. This vital element for agriculture, and therefore for our food, cannot be substituted by another element, nor can it be produced synthetically. Recycling the phosphorus contained in animal manure from livestock farming therefore represents an important economic potential.

The world reserves of phosphorus (mineral phosphates) are depleting and the few producing countries, including Morocco, one of the main ones, have to face a growing demand, linked to the galloping increase of the population. The result is tension in the market, and phosphorus is set to become not only an economic but also a political issue. In 2008, for example, its price increased eightfold in just a few months.  China has put in place precautionary and protectionist measures and taxes its phosphorus very heavily on exports.

Optimizing the use of phosphorus – Solugen

It is therefore obvious that the situation described is moving towards recycling of phosphorus from animal dejecta, and animal by-products (bone phosphorus for example), and plant by-products.

Among the various possible solutions, there is one based on an energy-efficient process developed by Solugen, which treats pig manure. By concentrating, during the liquid/solid separation process, most of the phosphorus in the slurry (85%) in the solid fraction, which represents only 10% of the initial volume of slurry, Solugen optimizes the management of this element. This results in fewer trips of transport vehicles to the spreading areas, thus reducing the GHGs emitted by these vehicles that run on fossil fuels, and a reduction in hydrocarbon consumption.  Fewer trips also means a reduction in the compaction of arable land by these vehicles, and thus a reduction in the leaching phenomenon that carries phosphorus and other nutrients to watersheds affecting water quality and potentially generating eutrophication phenomena.

By separating the phosphorus from the other macroelements (N and K), the risks of over-fertilization are reduced. In addition to its very small environmental footprint, 30 kWh are sufficient to treat 1000 liters of manure, the technology designed by Solugen offers environmental co-benefits, in particular by limiting spreading and the environmental problems that this effluent generates.