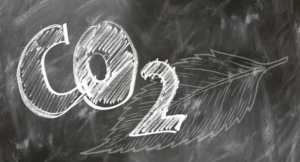 Some numbers to start

In Canada, total greenhouse gas (GHG) emissions from all activities in 2018 were 729 megatons of carbon dioxide equivalent (Mt CO2e).

The Kyoto Protocol lists six greenhouse gases generated by human activities. Three of these gases account for 98% of the adverse effects on the atmosphere

CO2 or carbon dioxide (79%), CH4 or methane (14%), and N2O or nitrous oxide (5%). The three other gases are HFCs or hydrofluorocarbons, PFCs or perfluorocarbons and finally SF6 or sulfur hexafluoride. Of course, these are not the only air pollutants. For example, ammonia is considered an air pollutant. It combines in the atmosphere with sulfates and nitrates to form secondary fine particles (PM2.5).

– Carbon dioxide (CO2) from industrial activities comes mainly from fossil fuels or from industries such as cement. Massive deforestation also affects the generation of carbon dioxide, as it is no longer captured by photosynthesis.

– N2O or nitrous oxide is released during chemical processes, such as nylon production, or from the use of nitrogen-based products (fertilizers, manure, slurry and crop residues).

Globally about a quarter of GHG emissions are attributable to the various activities of agriculture. In 2014, they accounted for 10 to 12 gigatons of CO2 equivalent, or 24% of global emissions.

Nitrous oxide emissions occur during the nitrification and denitrification of the nitrogen contained in manure. In Quebec and Ontario, we consider an emission capacity of 0.012 kg of nitrous oxide per kilogram of manure.

Canadian agricultural activities account for 12% of GHG emissions in Canada.

Emission sources can be classified into three main categories:

– Sources related to the use of fossil fuels (farm machinery, various vehicles, including those used to transport manure),

Synthetic nitrogen fertilizers are synthesized through a process that requires nitrogen and hydrogen.  The manufacture of synthetic fertilizers generates a significant amount of greenhouse gases.

Source: Arvalis, Institut du Végétal, recognized by the French Ministry of Agriculture and the French Agency for Ecological Transition.

The storage of liquid manure in pits is a major source of methane emissions. In this anaerobic environment, volatile solids, undigested elements of the feed, are transformed into methane by bacteria.   During the spreading process, nitrous oxide is emitted. The process developed by Solugen to treat contaminated effluents applies to pig manure and allows the treatment of animal excrement to extract pure water and fertilizers.

The technology works on an energy efficient distillation principle based on the use of electricity, heat recovery by thermal transfer, and steam recompression. 30 to 35 kWh are sufficient to treat one cubic meter of slurry.

By treating the slurry directly from the pre-pit, it is no longer necessary to store it in a pit. Furthermore, during the process, the manure is divided into a solid fraction, which represents about 10% of the initial volume of manure, and a liquid fraction which, after treatment, will be broken down into pure water, a concentrated potassium bioliquid and a nitrogenous fertilizer solution.

It is estimated that 90 to 95% of the GHGs normally emitted during storage and spreading of liquid manure are thus eliminated. For a farm that produces 10,000 m3 of manure annually, this reduction represents some 572 t C02 eq.

Thus, not only does the process revolutionize conventional manure management by treating animal waste to extract water and considerably reduce GHG emissions, but it also provides agriculture with a much sought-after fertilizer solution, since its active ingredient, ammonia nitrogen, is normally lost to crops because in its gaseous form it volatilizes rapidly and in large proportions into the atmosphere.

Considering the reduction of GHG emissions mentioned above, we can logically conclude that the production of this nitrogen fertilizer solution does not generate a carbon footprint.

Towards the optimization of phosphorus use in agriculture

Fertigation – How Solugen contributes to the organic agriculture