The term is particularly topical and appears frequently in economic forums dealing with sustainable development and environmental preservation.

“A system of production, exchange and consumption aimed at optimizing the use of resources at all stages of the life cycle of a good or service, in a circular logic, while reducing the environmental footprint and contributing to the well-being of individuals and communities”.

Solugen and the circular economy

Solugen’s solution  which extracts clean water and reusable concentrates from contaminated water fits perfectly into the concept of a circular economy.

Pig manure, whose conventional management is not only costly, but also requires adapted logistics and environmental constraints, is a typical example of a material whose treatment by means of an adapted technology contributes to create a circular economy:

– Clean water extracted from the process can be reused.

– Bio-liquid fertilizers resulting from the treatment constitute a source of income for the farmer.

– As far as the residual solid fraction is concerned,  it offers the benefit of being easily transportable at reduced cost, and thus phosphorus management  is optimized (the solid fraction contains 85% of the phosphorus initially contained in the manure).

– Farmers have the ability to increase their production (remove slurry pits and on the same area build additional livestock barns) reduce their operating costs, create new jobs and contribute to the growth  of their sector.

All of this is in line with the principles of sustainable development, significant reduction of greenhouse gases, limiting the risk of eutrophication of waterways, and limiting the overall carbon footprint.

Can we go any further?

It seems so. Here is an example. There are companies which specialize  in insect production, expecially  a variety of fly called black soldier fly (Hermetia illucens). Why produce those insects? At a certain stage of growth, the larva of Hermetia, the Black Soldier Fly, is dried, ground and partially defatted. The result is a protein concentrate with 55-60% protein in the dry matter. The amino acid spectrum is very similar to that of fishmeal. This Hermetia flour can cover all the amino acid requirements of trout (and trout can be considered as a reference for other fish species). 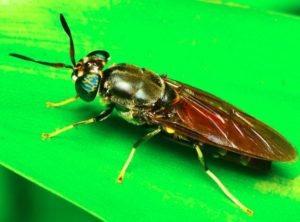 For larvae reared on manure the scenario is somewhat different, as they cannot be used to produce food for human or livestock consumption. However, Black Soldier Fly larvae are capable of rapidly transforming any nutrient into compost and super fertilizer (Frass). In addition, their fat, rich in fatty acids, offers interesting characteristics for other technical applications.  For instance, these larvae constitute an interesting source of oil for use in the manufacture of biofuels and bioplastics.

In addition, the larvae feeding on nutrients in manure contribute to the reduction of greenhouse gas (GHG) emissions

Speaking about circular economy we can therefore imagine the following scenario:

The solid fraction of the manure initially isolated during liquid-solid separation serves as a nutrient substrate for the black soldier fly larvae that develop there and from which oil will be extracted for use in biofuels and bioplastics production.

Research and tests  will be conducted to validate the possibility of rearing black soldier fly larvae on the solid fraction of hog manure.

Special thanks to Richard Védani Co-founder of B.I.O Technologies, for his  contribution