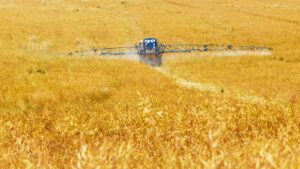 When talking about fertilizers, it is necessary to specify the type of fertilizer: liquid, soluble, organic, synthetic, its formulation, etc.

Let’s take the case of nitrogen, which, along with potassium and phosphorus, constitute the trio of excellence of elements that plants need for their growth.

Since the dawn of humanity, farmers have used fertilizers to maximize their production. Today, some 130 million tons of synthetic fertilizers are produced each year in the world. An impressive figure. Only half of these 130 million tons are assimilated by plants. Beyond the accumulation of fertilizers in soils and their impact on water tables and rivers, these fertilizers generate important greenhouse gas emissions (GHG).

The production of synthetic fertilizers is a major source of greenhouse gas emissions. It is estimated that about 40% of the GHGs emitted by fertilizers are generated during their production and transportation. 60% are the result of their use on agricultural soils. These GHGs are largely nitrous oxide, a potent greenhouse gas that has a 100-year global warming potential 300 times greater than CO2.

In terms of fertilization, nitrogen is a must and agricultural crop production depends on this element. It appears, however, that synthetic nitrogen fertilizers have a significant impact on the climate crisis. In September 2019, the World Bank published a report that stated that “The fallout from nitrogen pollution is considered one of the largest global externalities facing the world, impacting air, water, soil and human health ‘’.

For example, out of every 100 tons of GHGs emitted worldwide about 2.5% come from the nitrogen fertilizer industry.

In 2018, the synthetic nitrogen fertilizer supply chain accounted in terms of GHG emissions for about 1.25 GtCO2e or approximately one-fifth of the direct emissions from global agriculture.

Also in 2018, GHG emissions from synthetic nitrogen fertilizers were distributed as follows:

According to the GES’TIM publication guide, recognized by the French Ministry of Agriculture and Fisheries the production of one kilo of nitrogen fertilizer represents an average emission of 5.34 kgCO2e.

Variations in energy costs, which are also reflected in transportation costs, have a direct impact on fertilizer price fluctuations. Indeed, fertilizer production is an energy-intensive process. Thus, the increase in energy prices, gas for example, reduces the global supply of fertilizers, which has led to a significant decrease in world production in 2021 and the introduction of restrictions on exports to major consumer countries such as the United States. China is a good example of this situation, as it is the largest producer and exporter of fertilizer in the world. It supplies, among other things, 10% of the world’s urea production. Both China and Russia are aiming to meet their own needs and are imposing restrictions on export quotas, which have led to a rise in prices, particularly for nitrogen fertilizers. These restrictions took effect on December 1, 2021, for a period of six months.

Azogen, the natural nitrogen fertilizer from Solugen. A promising Future

As we have mentioned on several occasions in our previous blogs, Solugen’s innovative process for treating liquid pig manure allows, in addition to the recovery of pure water and the distribution of fertilizing elements (phosphorus in the residual solid fraction and liquid potassium concentrate), the capture of ammoniac from the manure, which would otherwise have been volatilized into the atmosphere, and its restitution in liquid form.

This ammonia solution (Azogen), generated without chemicals by an energy-efficient thermal process, offers particularly interesting fertilizing properties and is part of a circular economy logic.

Azogen was recently tested by an agricultural research center in Quebec. The tests were conducted in the spring and summer of 2021 on spring wheat and soybeans.

In a future blog post, we will go into more detail about this research project. The tests were conducted under real conditions on microplots representative of agricultural production, and were intended, among other things, to determine the fertilizing potential of the Solugen solution, by comparing it with commercial nitrogen fertilizers.

One of the elements of the test protocol was to compare the fertilization results of two spring wheat plots:

T1: No commercial nitrogen and Azogen (at 7% nitrogen) foliar application of 1.75 l/ha every 15 days.

T5: Maximum commercial nitrogen and split (50% at seeding and 50% at tillering). In this case the nitrogen came from two types of fertilizers:

– During sowing stage, a mixture of fertilizers with 12 and 24% nitrogen respectively

– During tillering  stage(the vegetative propagation mode of many plant species that allows them to produce multiple secondary shoots), a fertilizer with 24% nitrogen.

The results in favor of Azogen speak for themselves. They show that the level of performance obtained for the crops on these two plots is roughly the same using only 0.6kg of Azogen/hectare for plot T1, versus 94.8kg of commercial nitrogen used on plot T5.

Average results of the different analysis for spring wheat

The agricultural research center in charge of the test project concludes:

By using Azogen™ instead of conventional fertilization, large amounts of nitrogen could be saved, generating proven environmental and economic benefits.

In an upcoming blog we will  further describe equally promising results achieved on soybean plots.     To be continued…